East India Company: How it entered the Indian market to make money and how it used the money to buy India itself

I read two books on the East India Company (EIC) which have fascinating details and insights: 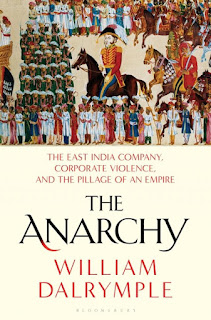 The company acquired territories with money as much as it did with guns. The Indian kingdoms were bought as much it was fought. The company paid bribes to Indian rulers and army commanders to betray each other as well as to make or break alliances. It paid its Indian soldiers much more than Indian kings and obviously got the best and most loyal troops. They were able to buy the services of even the Naga Sadhus as troops. Before this, the Sadhus had fought on the side of the Muslim princes. The naked and ash painted Sadhus fought with clubs, swords and arrows.

The company used money to become powerful not only in India but in Britain itself. It had contributed funds to British members of Parliament as well as the Crown and ministers creating a strong lobby to protect and promote its interests. The company had bribed even the Solicitor General and the Attorney General. A parliamentary investigation found the EIC guilty of bribery which lead to the impeachment of the Lord President of the Council and imprisonment of the Company’s governor.

About 40% of its shareholders were MPs. After their return from India some Company officials used their fortunes to get elected to the Parliament and lobby even more for the company. When EIC faced bankruptcy, the Parliament bailed out the company with public funds since EIC was too big to be allowed to fail.

Initially the company brought silver and gold from UK for purchase of Indian items such as clothes and spices. But later it acquired enough local wealth with which it financed its purchases and trade. The company offered military service to Indian princes in return for payments and land grants.


Indian bankers and money lenders such as the Seths competed with each other to finance EIC’s military and trade ventures. EIC borrowed annually 400,000 rupees from Jagat Seth in the period 1718-1730. The Hindu moneylenders were giving credit and financial support to the Muslim rulers too.

The Greek, Turk, Afghan, Persian and other Muslim kings invaded and conquered parts of India with their army as part of their plan for expansion of their territories or for plunder. But the British conquered and colonized the whole of India and ruled for three centuries not with any grand strategy, imperial design or mighty army. The British East India Company (EIC) came just for trade and became rulers by taking advantage of the opportunities provided by the decadence of the Mughals and the fighting between rival kingdoms. The EIC used mostly Indian soldiers and money to fight Indian princes and take Indian territories bit by bit until they had the whole of the subcontinent. It was only then that the British government stepped in and assumed control of India as a colony.
EIC started off as a joint stock corporation and ended up as ruler of the world’s largest empire. It sought very humbly permission for trade from  the rich and powerful Mughal emperor Jahangir, the richest monarch in the world at that time. The Mughal army was huge with about 4 million men.  When the first EIC vessel reached Surat in 1608, England was a a relatively poor and largely agricultural country which had spent almost a century at war with itself on religious issues. England had just 5% of India’s population and 3 % of world manufacturing output. In contrast, India had a large population of 150 million and accounted for a quarter of global manufacturing. In two centuries EIC made the last Mughal emperor Shah Alam as its pensioner, paid and protected by the company.

EIC was concerned only with profit for its share holders and it cautioned its employees not to get into wars and local conflcits which could go out of control. The EIC headquarters did not like building of forts and raising troops which would add to avoidable expenditure. But the company chiefs and officials in India took initiatives and became adventurous seeing the opportunities thrown up by the constant fighting between the local kingdoms and rivalry between rulers. In many cases, the Indian princes sought out the support of the EIC to settle scores among themselves. The company joined with one faction, defeated the other and eventually took over both sides. The audacious and ambitious company chiefs like Clive, Cornwallis and Hastings went beyond the company brief and acquired territories and fortunes for themselves.  The traders and agents of EIC became administrators of law and order, tax collection and justice. They waged wars and signed peace agreements like the governments.

At its zenith, the company had a 200,000 strong army which was twice the size of the British army in England at that time. It accounted for nearly half of British trade and significant portion of tax revenue and customs duties.

EIC had many setbacks too. When EIC tried to use force against the Mughals in Bengal in 1686 with 19 warships, 200 cannons and 600 soldiers, they were quickly beaten. The emperor seized EIC’s  factories, captured and imprisoned company officials and expelled them from Bengal. The English then begged sued for peace and begged for pardon which was granted by the emperor in 1690. Thousands of British died of diseases and in the wars. But they did not give up. They worked patiently, waiting for the right opportunities and making the right alliances

EIC did not recruit the best from universities or gave any formal training to its new employees. Many of those who joined the firm were the unemployed from the lower strata of the society who did not mind the risks of death and diseases in India. With autonomy of operations, the adventurers learnt to become administrators, the merchants turned into warriors and the soldiers became merchants. To compensate for the risks and suffering, the company allowed its officials to do private trading on the side to make extra money.

Robert Clive came to India as a humble accountant when he was 18. But he transformed as a military, political and business leader in India and went back as a multimillionaire. Clive became the richest self-made man in the whole of Europe. After the battle of Plassey, he took over the contents of the treasury ( estimated at 2.5 million pounds) of the defeated rulers of Bengal

The acquisition of Indian empire was one of the earliest examples of Public Private Partnership (PPP). EIC was given a monopoly charter by the British government. When the company went beyond commerce and started building the empire, the government provided active support militarily and administratively. EIC was also an early example of crony capitalism. The company was given monopoly, support and privileges by the State whose MPs and the Crown had earned profit from it.

Madras, Bombay and Calcutta are essentially creation of EIC as company towns. Before the company came in, they were just unknown villages. In fact St George fort was built by Francis Day with his own money. EIC Headquarters was unhappy with his decision to incur so much expenditure in building a fort which was considered as a needless extravagance. Day was called back to London in 1641 and chasteised. Later, the company realized the wisdom of Day and reimbursed him. EIC built its first fort in Madras which was not a strategic place for a fort. Francis Day the company official in Coromandel coast fell in love with a Tamil woman. He chose the area to build the fort since it was next to her village. Madras was the first English colonial town in India with its own civil administration.

In the beginning, the EIC could not get the required permission for trade from the Mughal emperor. So the British government had to send an ambassador for ‘Economic Diplomacy’ to open up the Indian market. It sent Thomas Roe as Ambassador to Emperor Jahangir. Roe used his diplomatic skills to get trade concessions and support from the Mughal and win him over from the influence of the Portuguese who were already entrenched in the Indian market. During his stay of three years from 1615 to 1618,  he sent regular political despatches to his government on the situation of India. 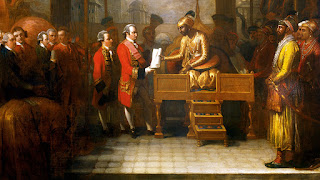 The Boston Tea Party which lead to the independence of US is also connected to EIC. The British government wanted to open the North American market for the tea exported by EIC and this provoked the Americans. The crown lost America but the company won the Indian empire for the crown. Cornwallis, who surrendered the British forces to American freedom fighters in 1781 redeemed himself by defeating Tipu Sultan and other Indian rulers and gained territory for the crown.

EIC was the world’s first Drug Lord, much before Pablo Escobar. It smuggled Opium from India to pay for its import of tea from China. EIC encouraged peasants in Bihar and Bengal to cultivate opium. Since opium was prohibited by the Chinese government, the company would not use its own ships to carry the opium to China. It sold the opium in auctions in Calcutta from where it was smuggled by  independent agents. These agents bribed the Chinese customs and managed to sell their contraband. They deposited their Chinese currency earnings in EIC office in Canton. In 1838, the opium exports were 1400 tons a year. When the Chinese tried to stop the smuggling, the British government fought three opium wars to force opium down the mouth of the Chinese and make millions of them as addicts.  The Opium wars and the humiliation suffered have left deep historical scars in the Chinese. They  are taking revenge by conquering the west through trade, investment and money power just as the East India company did in India.

Posted by viswanathan at 7:40 PM