The TCS Story.. and beyond - Book by Ramadorai

This is part autobiography, part company history and part the story of India itself since Ramadorai and TCS had played a pioneering role in paving the way for India's reincarnation as an IT powerhouse.

Ramadorai narrates his personal life and growth candidly with his charateristic humility and down to earth self-effacing manner. Born in a  Tamil Brahmin bureaucrat family, he imbibes the traditional virtues such as simplicity, discipline, hard working habit, obedience of seniors and commitment to work and the institution. He goes to US for higher studies after which he gets a job there. But he comes back to India to join the newly formed computer company of Tata in 1972 as Assistant Systems Programmer and Analyst. He marries a girl chosen by his family from the same Brahmin community. He is posted as the first resident TCS manager with the challenging job of getting contracts from American companies who had no idea of TCS or Indian software capability in those days. Even the Tata president in US, Mr Naval Mody discouraged  him strongly saying that there was no way to set up a business in the US for an Indian company like TCS. Ramadorai learnt the skill of sales and marketing quickly moving beyond his technical competence. While modest in personal life, Ramadorai was audacious in taking business risks and trying new ventures. Every contract was an unprecedented learning experience and there was no previous models for him to follow. Most of the journey was in untrodden path. He and TCS paved the way, as the Spanish poem says

oh traveller, there is no way here
you make the way as you walk

What was the origin of the Indian software industry? Ramadorai says that it was born, not by any grand design but by an accident of history. When the Indian government allowed TCS to import a mainframe computer, they put a condition that the company should export and earn twice the dollar cost of the machine in five years since India was short of foreign exchange those days. TCS went to US to earn dollars by offering software services. The rest is history.

Ramadorai started work under Kohli, a typical Indian boss known for his strictness and authoritarian style of dealing with subordinates. While describing Kohli as his mentor, Ramadorai chose a different model of leadership. He became a team leader listening and delegating to others, encouraging colleagues to express themselves and taking decisions by consensus. His successful work and leadership qualities took him to the corner office as CEO from 1996 to 2009. He made TCS as the number one IT company of India and a respected global player. He planned properly and transparently for his succession by identifying and mentoring Chandrasekaran to take over from him in an orderly manner. This is a practical illustration of what TCS says in its logo "Experience Certainty"

The story of TCS is equally exciting. It was started as a data processing unit and later became subcontractor and service provider to the American and British computer companes. TCS had tough time in India during the " Licence Raj" and had tougher time convincing their American clients that an Indian company could do IT work at that time when the country had only a few computers imported despite the stringent customs and foreign exchange restrictions. Whatever TCS did in its evolution was path-breaking and they had played a critical role in establishing the credentials of Indian talents and companies globally. Even more remarkable is the fact that they pulled off the IT success within the value system and tradition of Tatas. As Tata employees, they played by the book and did everything properly and correctly. TCS is an example of building a global company in an Indian way with young Indians hungry to learn and succeed with little resources but lot of ambition and creativity.

The story of TCS is also the story of the New India in a way. Today India is perceived and admired by the world as a formidable IT powerhouse. TCS can claim credit for laying the foundation for this new paradigm and image of India. The success of TCS opened the doors for other Indian IT companies   and inspired  thousands of young Indians to have a new dream, new life, new confidence and self esteem.

When Indian companies were shy about entering Latin America on the ground that distance and languages were barriers, TCS succeeded in the region by turning the two so-called barriers into advantages. TCS has created a new 12x12 business model in which their Latin American staff work for 12 hours in the same time zone of US and pass on the work to Indians for the remaining 12 hours. Besides in English, TCS gets work done in Spanish, Portuguese, Italian and German, making use of the European ancestry of most Latin Americans. Ramadorai says, " We saw Latin America as a testing ground for our strategy in the emerging markets". Today, TCS employs over 8000 Latin Americans in nine Latin American countries and is targetting ten percent of its global revenue from the region. The success of TCS has opened the doors two dozen other Indian IT companies to enter Latin America.

With his firm belief in " Technology as the enabler of development" Ramadorai advocates that technology  could be used smartly and cost-efficiently to solve many problems of India. He has a vision for India and has clear ideas to deal with issues such as health care and education. It is good that the Government of India has taken advantage of his expertise and has made him as Advisor to the Prime Minister on the National Skills Development Council, with the rank of a cabinet minister.

The story of Ramdorai is an inspiration to the new Indian IT Generation. It teaches them that they do not have to imitate or go overboard to change their accent while dealing with the western clients. While Ramadorai did astounding work for TCS taking risks and pulling off audacious feats, he has remained true to his personal nature as a simple person with firm attachment to family, friends and Indian traditional values. He admits, "I was extremely shy and that shyness has stayed with me. But I have become better at hiding it, over the years." He used to do brainstorming with his colleagues over coffee or lunch during weekends at his residence making his colleagues feel at home and bonding with them. He says,"Sharing information (with speed) with colleagues became an obsession with me". This makes him distinct among many other CEOS who keep information with themselves due to their personal insecurity and to make themselves indispensable.

Ramadorai has been an inspiration to me too. He says, " I like to answer every mail I get within twenty four hours". He acknowledges that he learnt this discipline of prompt response from Nani Palkhiwala. Ramadorai is in my mailing list of hundreds of people to whom I circulate copies of my articles and blog postings on Latin America regularly as BCC. Invariably, he is the first one to respond immediately or within 24 hours, saying, " Thanks and regards". Sometimes he will make comments on the contents or ask me for further information. He should be receiving thousands of mails every day. But still he has time to read and respond to my stories on Latin America which are of peripheral interest to him.  He is so well organised and disciplined and has time for everything and everyone.  His time for replies to emails is in the morning by 5 am. 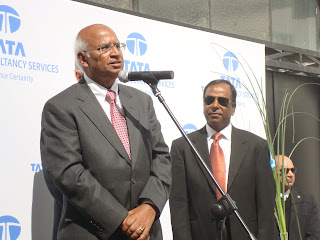 Photo: Ramadorai speaking at the inaguration of the new TCS office in Buenos Aires on 15 September 2009 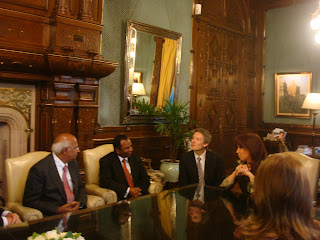 
The moral of the story of TCS and Ramadorai for the promising young IT generation of India:

- IT does not have to mean just individual success such as those of Bill Gates, Steve Jobs and Mark Zuckerberg.  The story of Ramadorai and TCS is an alternative example of institutional success. Ramadorai succeeded within the framework of TCS which evolved in the tradition and value system of the Tatas.

- Ramadorai changed and transformed TCS and Indian image but this success has not changed his life style, core values and essential Indianness. He has the best combination of what India offers in spirit and what the West offers in business professionalism.

And there is one for the CEOs too. Ramadorai ends the book with his own quote, " A CEO should be judged not just by what he built but more importantly by what he leaves behind for his successors to build upon".

Posted by viswanathan at 9:11 PM 3 comments: