I attended the 172nd edition of Thyagaraja Aradhana (tribute) music festival which honoursthe legendary Carnatic music composerevery year on his death anniversary.  Thyagaraja composed most of his music while living in Thiruvaiyaru where he died in 1846. The Festival is held in the premises of his samadhi (memorial) on the banks of the Cauvery river. This is perhaps the oldest classical music festival in India. 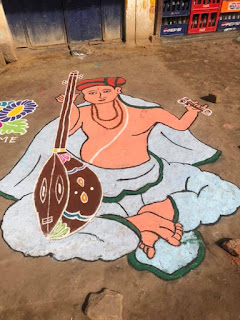 A total of 242 concerts were held in the period 21-25 January. Typically the new musicians are given 10 or 15 minutes while the established ones including Jesudas get 20 minutes to perform. The concerts start at 9 am and go non-stop till 11 pm without any break. They are organised with Swiss punctuality without waste of any time. There are  two stages. When one concert is about to finish, the next group sits on the other stage waiting to start. Nadhaswaram performances are the second most predominant, after vocal concerts. 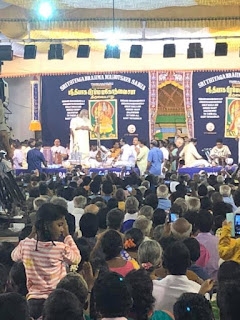 The musicians consider it a privilege to perform in the Aradhana and come here paying themselves for their travel and accomodation. They do not get any performance fees either. Some of them come regularly every year.Those learning Carnatic music worship Thyagaraja as a saint and perform pujas at his temple. 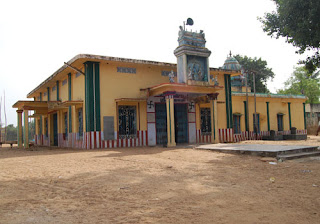 The temple
The vocalists sing mostly in Telugu and a few songsin Sanskrit, since the Thyagaraja, a Telugu Brahmin from Thiruvarur composed in his mother tongue and the mother of the mother tongue Sanskrit. ‘Sri Rama’is the much repeated refrain in most of the songs. Thyagaraja was a devotee of Rama.
The music festival culminates with Pancharathna singing on the last day which was on 25 January this year. It was an amazing experience to see thousands of people (professionals as well as audience) singing together in chorus the Pancharathna (five gems) Kritis ( musical compositions) composed by Thyagaraja. The organisers had distributed copies of the Telugu and Sanskrit (four in Telugu and one in Sanskrit) song lyrics in Tamil script for the audience. This event is telecast live in Doordharshan Tamil channel every year. 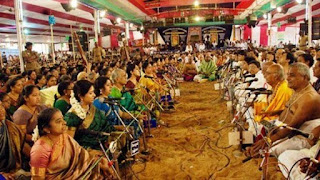 There are no tickets for the concerts which are open to the public. The hall becomes full and overflowing outside for the Pancharathna event and when celebrities come to sing. This year the celebrity singer was Jesudas from Kerala. The music can be heard not only inside the hall but also in the streets of the town which are fitted with loud speakers.
There was a time, when women were not allowed to sing at the festival.The credit for opening women’s participation goes to Bangalore Nagarathnamma. She was a Carnatic singer, cultural activist and scholar in the early twentieth century in Karnataka. After becoming an ardent devotee of Thyagaraja she came to Thiruvaiyaru where she settled down in 1920. She built a temple over  Thyagaraja samadhi and contributed to the tradition of the Aradhana. Her samadhi is next to Thyagaraja’s.
It was not easy for her. She hailed from the  devadasi (courtesan) community, which was looked down. She was the first president of the Association of the Devadasis of Madras Presidency. She was the "first female artist to pay income tax" in Madras province in those days.
The President of the Aradhana committee is Rangasamy Moopanar, a rich landlord from Kabisthalam, near Thiruvaiyaru. Karuppiah (GK) Moopanar, his elder brother and Congress stalwart was the President for 36 years till his death in 2002. His son GK Vasan is the chairman of the Board of Trustees. The Moopanar family has been well known as patrons of culture.
Thiruvaiyaru is a quiet small town with a population of around 20,000. It does not have proper restaurants or hotels to accommodate the artistes and festival visitors, who stay in Thanjavur, 12 km away. Thiruvaiyaru is known as the land of five rivers (Iyaru means five rivers) namely Cauvery, Vennar, Vettar, Vadavar, and Kudamurutti rivers. The deity in the famous temple in the town is Aiyarappan /Panchandeeswarar which mean Lord of five rivers. 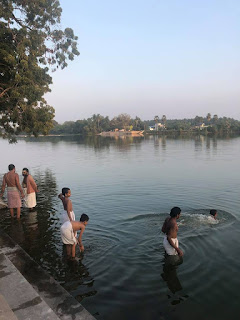 There is belief that those who die in Thiruvaiyaru, considered as the sacred equivalent of Benares, will go to heaven. Some old people come to stay in the Chattirams (charity accommodation) at their terminal stage waiting to die there. Sixteenth day Ceremonies as well as anniversary rites for the dead are done on the bank of the Cauvery river in the town. There are over fifty Brahmin families which live on the income of performing the rites for the dead.
The venue of the annual music festival is the samadhi of the saint which is on the bank of the Cauvery river. The audience sit on the floor which is just pure river sand and enjoy the breeze coming over the Cauvery waters. 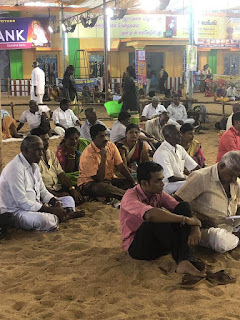 The music hall is open-air with shamiana cloth cover on top. It feels as though the music flows into the river. The music- filled water has made the Cauvery delta region fertile, as evident from the lush green fields of rice, coconut, sugar cane, betel leaf and bananas.

The historical prosperity of the region around Thirvaiyaru had given more time for the people of the region to pursue music, dance and other forms of arts and culture. Thygaraja and the other two famous composers (Trinity of Carnatic Music) Shyama Shastri and Muthusamy Dikshidar were born in Thiruvarur, another town in the same delta region, seventy km away from Thiruvaiyaru. Many of the Carnatic musicians come from the Cauvery delta region. Proud of this lineage, artistes use the name of the place as their first name such as Umayalpuram Sivaraman, Papanasam Ramani, Thanjavur Raju, Kumbakonam Aravind, Mayavaram Pandian, Ayyanpetteai Haridoss and Thruvaiyaru Murugan.

The region of Thiruvaiyaru and Thiruvarur was part of the Chola dynasty of Thanjavur which had patronised arts and culture and built historic temples. The Chola dynasty has a distinct place in Indian history. Cholas were the only Indian rulers who ventured outside India conquering overseas territories and colonising parts of South East Asia. Alas.. History has its own way of humbling the proud. After the decline of Cholas in the 15th century, Thanjavur came under the Telugu speaking Governors appointed by Vijayanagara empire. In 1675 the Marathas took over Thanjavur and ruled till they lost to the British in the ninteenth century. There is still a Maratha dynasty prince living in the Thanjavur palace surrounded by a small Marathi community. The Maratha kings promoted Sanskrit and before them the Nayaks patronised Telugu language. So this explains the Telugu and Sanskrit compositions of Thyagaraja who did not bother to use Tamil in his music although he had lived in the heart of Tamilnadu.
Poor me.. despite the fact that my village is close to Thiruvaiyaru,I did not understand a word of the songs of my neighbour Thyagaraja which were only in Telugu and Sanskrit...Moopanar, the President of the Board of the Thyagaraj Aradhana Trust do not understand either..One of those (among many others) cultural contradictions in Tamil society.
Posted by viswanathan at 6:54 PM 2 comments: