Snow Golf in the ¨End of the World¨

Snow Golf Tournament... when I saw the news, I said ...Oops.
I thought.. hmmm.. there are golfers crazier than me. When I reached the golf course today, there were 43 more crazy golfers. 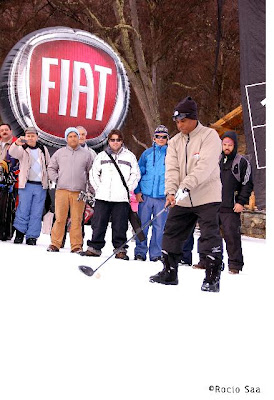 It was the 4th time the Snow Golf tournament was organised in Cerro Castor ski resort. It is in Ushuaia, the southernmost city and also called as End of the World (Fin del Mundo). 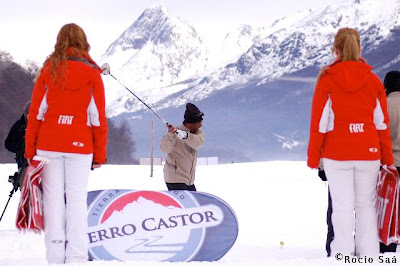 The golf course had 9 holes at the base of the ski resort. There was one five par while the rest were par 3 and par4 for a total of 30. The Green was compact snow with a blue coloured circle around.
Here I am with Juan Carlos Begue, the owner of the ski resort 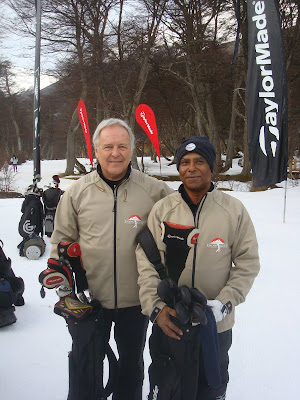 Twenty out of the 44 players were from Buenos Aires while the rest were from the End of the World. There was even a women´s foursome. In Ushuaia there is a 9 hole course which is open in summer.
The snowgolfers listening to the instructions and rules by the pro. 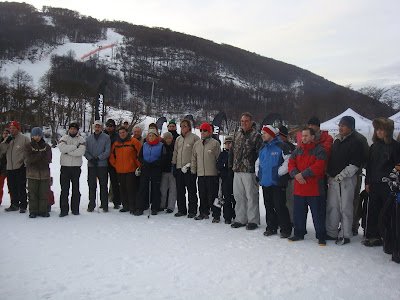 The Snow Golf advisory said
- dont put heavy jackets which will hinder the swing
-put on snowboard shoes
-coloured balls would be given by the organisers
-bring half a set with maximum of 7 clubs including putter. 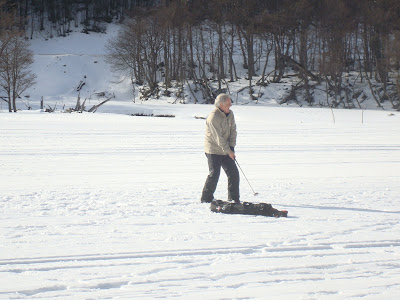 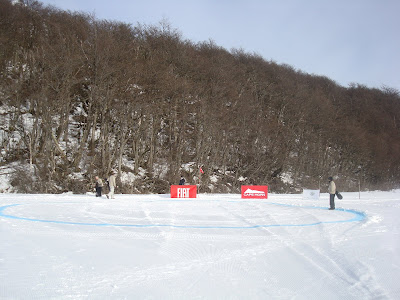 It was a Lugunada tournament, which means best score of the four players in each hole. I started off with a par at the 220 yard first hole and birdied the 270 yard. I had two more pars and my partners also contributed. We had a total of 4 under. Hmm... we came fourth. The winners played 7 under...the second and third position went to those who did 5 under.

There was water hazard in two holes with a stream running to catch the sliced balls. Here it is... 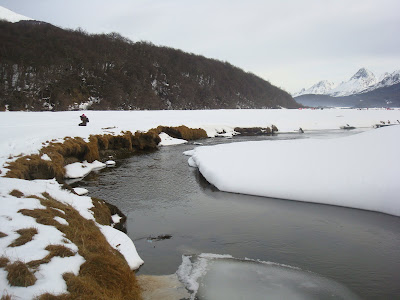 The ball does not run on the snow, obviously. So one has to hit a high ball and play a longer club. Even while putting, one has to hit the ball hard. If not, it will get slowed down and get turned to right and left. 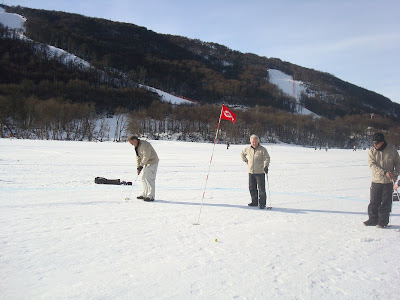 Golfers are known for craziness. I had played in a desert golf course in Libya where the fairway was all sand. The ball would fall on the sand and disappear. We used mats or tees to hit the ball on the sand. I had played at 42 degrees centigrade in Delhi Golf club. Someone commented that I was able to withstand the hot sun due to the thick skin developed in the course of thirty years of government service..
Prize distribution ceremony.. 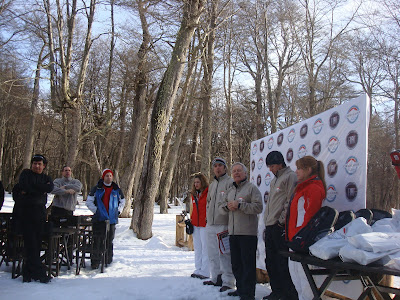 Today we were lucky with the weather. It was a sunny and beautiful day with a maximum of 9 degree centigrade. I was worried about the fierce Patagonian wind which could pierce through one´s skin, flesh and bones. Fortunately the wind started only towards the end of the game and it was mercifully mild.
After the game we had wines from the Fin del Mundo winery from Patagonia followed by a lunch in which they served the delicious Patagonian lamb.
Posted by viswanathan at 2:17 PM