Silence of the Cicadas

The novel "Silence of the Cicadas" by M Ramesh is a delightful romance thriller. The reader is treated to a delicious feast of romance and love between the adorable archaeologist Anand and the pretty and smart Priya, the main protagonists. It is a kind of Tamil love with its own rules of restraint, respect for traditions and avoidance of public display of affection. Lots of words and little action.
But when the lovers meet in England, they discard all their Tamil scruples and constraints and dive direct and deep into uninhibited action-packed love. The artificial Adyar gates are thrown open to the free and natural flow of the canals of Yorkshire. The theoretical Tamil Kaadhal finds its carnal consummation in the free and open Dalby forests and lakes. No more words, no longer dialogues. It is pure action and full satisfaction. 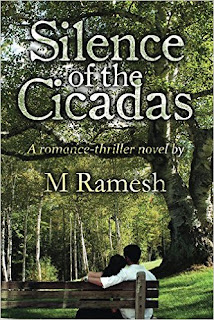 The most enjoyable parts of the book are the suggestive, sensual and teasing dialogues between the lovers during their encounters. But since Priya has a brilliant brain behind her beautiful face, the conversations are filled with vivacious wit, spirited repartees and creative ripostes. The lovers try to outwit each other playfully with words, ideas and descriptions. Here are some samples:
-Kiran Mazumdar's biotech company makes 'Auntie-biotics'
-Anand, knew only 'carbon dating' before meeting Priya
-He cannot hold anything from Priya because he is an ATM- Automatic Tell-her Machine
- He will write a novel "A tale of two titties"
The story is filled with plenty of suspense and surprise as well as unexpected twists and turns. The action jumps from the damp basement library of the Nawab's palace in Chennai to the picturesque and placid English countryside, from the historic Vellore fort  to Adyar estuary, from the British Deputy High Commission to the mysterious deep well with the skeleton of British officers dead in the Vellore mutiny and from ONGC's offshore drilling vessel to Amman temples.
The story ends in a dramatic way but I wish the denouement was different. Priya could have recognized the tree and her former lover and in that shocking and ecstatic moment Anand could have died.
Author Ramesh has gone beyond romance and thrills. He has packed the novel with lot of interesting information on archaeology, history, philosophy, offshore-oil drilling, helicopters, monasteries, abattoirs, snakes, criminal underworld, cigars, diamonds, vegetarian cuisine, Nawabi traditions and English characters. He has given lots of fascinating details of archaeology through the main character Anand who describes himself humorously as 'India's own Indiana Jones'.
Besides the unforgettable protagonists, there are some memorable characters in the novel:
-the pious and noble-spirited Nawab Zulfiqar who embodies the best of Islamic culture
-Tariq Imran, the debauched and criminal son of the Nawab, who enjoys drinking fresh-blood. He locks up his father in the true Mughal tradition to inherit the property.
- Anbu,the corrupt and crooked constable, who makes money on the side with off-duty dirty work for Imran
-'Paambu' Murugan, the contract killer who uses snakes to kill his targets
-Professor  Ganges Rao, addicted to Camacho Triple cigars, wine and women even in his eighties.
-Miss Bunting, the classic English lady who speaks fluent Tamil, admires the old Indian child marriage system and thinks Thyagaraja is a better music composer than Mozart.
With foreign readers in mind, the author has gone into explanations of the history of Chennai, Tamil culture and especially the Tamil Brahmin version, Hindu religion, South Indian cuisine, 'permit rooms' in Tamilnadu hotels and Indian English. At the same same time, he has sprinkled lots of typical Tamil words of endearment and expressions of anger and frustration to give authentic local flavor.  He has made a clever connection between Samayapuram and Yorkshire. Miss 'Mary'lene in Yorkshire gets her name after the visit of her mother Susan Winch to the 'Mari'amman temple in Samayapuram. He has made the patriotic Indian archaeologist debate with the imperial British diplomat on the subject of kohinoor diamonds and contrasted the typical Tamil overstatement with the British understatement.
This is the first novel of Ramesh, who has been working with the " Business Line" news paper published by " The Hindu" group of Chennai. When Ramesh told me that he had written a novel, I thought it might be based on his professional experience of reporting about the Chennai business groups. It has been a struggle for him to get any 'stories' or 'breaking news' from the conservative and pubilicty-shy family-controlled business groups of Chettiars and Srinivasans. Even if he got one, it would be another challenge for him to make it sensational given the orthodox and conventional tradition of The Hindu Group. Caught between the boring people on both the ends of his profession, Ramesh seemed to have found an outlet for his writing through the novel.
Hold on.. There is Latin America too in the novel, pleasing my nostalgic heart.  When Anand and Priya meet in a hotel room in England, they freak out with the Latin American spirit of " Celebra la Vida" (celebrate life), celebrating from second to second, giving out everything and holding back nothing. This is thanks to the author's visit to Brazil and listening to my Latin America lectures !!. I hope he takes his protagonists to Latin America in his next novel.
Posted by viswanathan at 8:31 PM

A review that would rush one to the nearest book store. I wonder if you could have expanded the review and sent it to "The Hindu" for their next literary supplement.

I am always searching online for articles that can help me. There is obviously a lot to know about this. I think you made some good points in Features also. Keep working, great job! online cannabis store